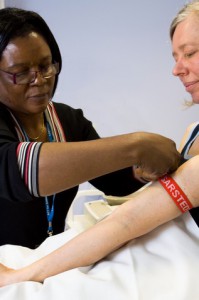 The goal is to develop and evaluate approaches that can cost effectively enhance the diagnosis, early detection, and prediction of chronic disease outcomes.

We have shown that there are marked differences in GP referral patterns across cancer types according to socio-demographic groups, suggesting the need to prioritise younger people and ethnic minorities for early diagnosis initiatives (Lancet Oncology 2012).

Our trial of approaches to diagnosing suspicious moles reinforced the importance and effectiveness of a systematic approach by GPs (BMJ 2012), for which Dr Walter was awarded the Royal College of General Practice cancer research paper of the year.

We have established the cost-effectiveness of screening men for abdominal aortic aneurysm (BMJ 2009, NEJM 2010), and defined appropriate surveillance intervals (JAMA 2013). Our trial of offering antenatal screening for sickle cell disease and thalassaemia as part of consultation for pregnancy confirmation in primary care showed an increase in the proportion of women screened before 10 weeks’ gestation (BMJ 2010).

We have integrated our gene-disease discoveries into widely used risk prediction algorithms for breast and ovarian cancer (BOADICEA) and cancer prognosis (PREDICT), and laid foundations for stratified approaches to breast cancer screening (NEJM 2008).

We have quantified the benefits and harms of screening for type 2 diabetes (BMJ 2009, Lancet 2012) for which the ADDITION trial team, led by Professor Simon Griffin, won the BMJ’s paper of the year and the RCGP diabetes research paper of the year.

We have demonstrated the predictive utility of routine GP data and how incorporating it in a stepwise approach to screening for cardiovascular disease would be more cost-effective than the current UK strategy (BMJ 2010).

Another of our modelling studies has suggested that screening middle-aged men with symptoms of gastroesophageal reflux disease using a Cytosponge, a device developed in Cambridge, would reduce mortality in a cost-effective manner (Gastroenterology 2012).