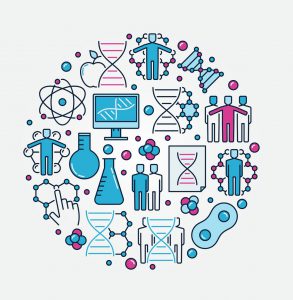 Researchers from Cambridge (Jennifer Asimit, Mary Fortune, Nastasiya Grinberg, Chris Wallace) and Oxford (Daniel Rainbow, Linda Wicker) found that with fine-mapping approaches for single diseases, inaccuracies often occur when there are two or more distinct causal variants that are both correlated with a single non-causal variant. In such scenarios, a common approach, stepwise regression, tends to detect the single non-causal variant  even when the number of individuals in the study increases. An alternative approach is stochastic search, which is able to detect the two causal variants as sample size increases. This motivated the development of MFM, a stochastic search method which increases accuracy for the studies of each disease by sharing information between them.

The authors applied MFM and the single-disease approaches to six immune-mediated diseases: multiple sclerosis, type 1 diabetes, rheumatoid arthritis, juvenile idiopathic arthritis, autoimmune thyroid disease and celiac disease. This revealed causal variants that were not found by the single-disease approaches, including variants in the gene IL2RA, which is known to contain genetic associations with immune-mediated diseases. In additional analyses of IL2RA using allele-specific expression (ASE), the authors confirm functional effects of multiple causal variants in the gene.

MFM is computationally efficient. This new approach to fine-mapping multiple diseases only needs the single-disease results as input and runs in less than 90 seconds for six diseases in one genomic region. MFM has the potential to increase fine-mapping resolution in related diseases without collecting larger sample sizes.